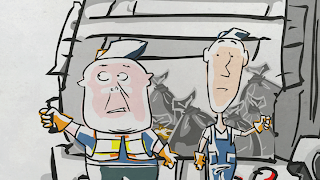 This is from a pilot I did a couple of years ago. The light of God from Heaven shines down upon our two garbage men. This would have been a fantastic show, the direction I was going in was something new and funny. We were really on to something with this...and then it all went down hill. Instead of having a discussion about things, bad decisions were being made by the producer and the creators that I was forced to comply with. Things were not thought out and debated, explained and defended. It's a shame too, because this project had some good potential.
Posted by Easy Zee at 2:30 AM

This is a Flickr badge showing public photos from zrisek@rogers.com. Make your own badge here.